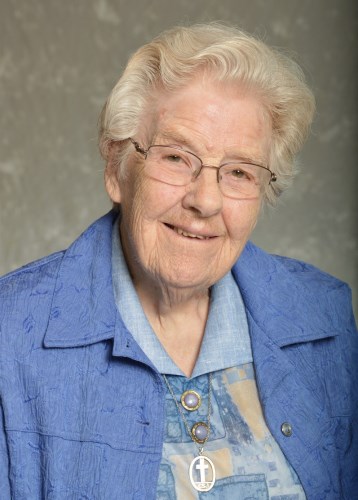 Sister Bonaventure was predeceased by her parents, Fredrick J. Sandford and Kathleen (nee Blake) Sandford. She will be sadly missed by her sister Loretto K. Sandford and her brothers Edward (Pat, deceased) and Fred Sandford (Mary Anne) their families, her Sisters in community, many former students, colleagues and friends.

At her farewell, she was commended for her excellent contribution to the field of education and for her understanding and commitment to staff and students. Following her retirement, Sister Bonaventure ministered at St. Joseph’s Spirituality Centre at Morrow Park. In her subsequent ministry to the Sisters in the Morrow Park Infirmary she was known for her kindness, attentiveness, and support for both staff and Sisters. Bonnie’s brother, Ed, played for the Boston Bruins and she became a lifelong fan of both hockey and baseball. In 2015 as her health declined Sister Bonaventure resided at the Sisters of St. Joseph Residence, where she received excellent care until God called her home.

There will be a private Mass of Christian Burial on Monday, June 14, 2021, followed by Interment at Holy Cross Cemetery, Thornhill. In lieu of flowers, donations may be made to Fontbonne Ministries, 101 Thorncliffe Park Drive, Toronto, ON M4H 1M2.